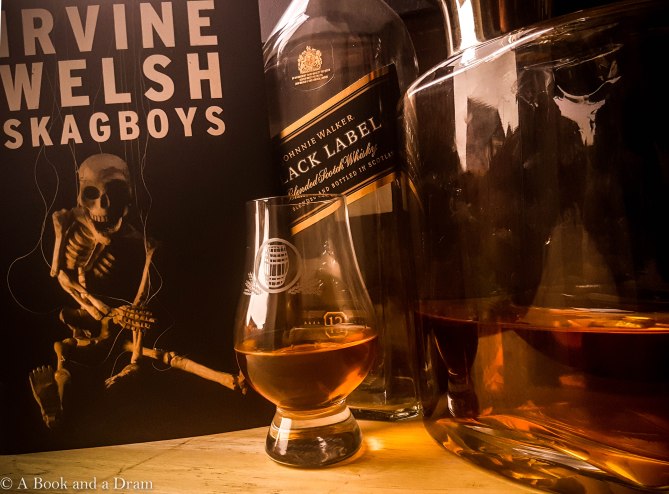 but this time showcasing some of our familiar cast of characters in somewhat different circumstances.

Another example also of a book bought long ago and remaining unread for a few years. I really need to stop doing that. However, it feels that in this case the accidental postponement may have been somewhat beneficial. Welsh is in a fierce mood and voices his discontents with Thatcher era politics and the impact it had upon Scottish communities in particular. This allows the story to feel fiery and anarchic in its rhetoric with Mark Renton beoming the leading voice of political angst. The problem with this is that his political commentary appaears throughout to be dripping with the benefit of a hindsight which he would not have. A brief look at Welsh’s Twitter account will often provide a similar polemic which makes it difficult to imagine too much invention being bestowed upon Renton.

Despite the heady political tone of the novel it still manages to offer fresh ife and insight into Renton, Sick Boy, Spud, Begbie and other peripheral characters. The advantage of this work being a prequel is that you are already immersed within their world and ambiguities from other entries in the series start to become answered. It is fascinating to see just how this gang of characters became entrenched in violence, schemes and heroin in Leith (and London and Holland).

As is the fashion in the Trainspotting

series the narrative flickers between the concerned parties in the novel in first-person, colloquial style and more occasionally from a third-person omniscient perspective. The addition here though of diary/journal entries written by Renton which support the idea of personal accounts being essential to the journey of rehabilitation in addiction circumstances. It is used with great effect in showing the process as you see Renton’s style of writing visibly changes, including crossed out words when he slips into a more standardised form of written English rather than using his Leith dialect. It gives the reader what feels like a more authentic version of events and the trials of heroin addiction recovery.

It is, all in all, a superb addition to theTrainspotting

chronicle by allowing readers to go deeper undercover into the the Young Leith Team (YLT) than ever before. Although it is a prequel, I would still not suggest reading Skagboys

as the first in the series. There is an assumption that a base-level of knowledge of the protogonists has been acquired before opening the book – perhpas not the wisest idea Irvine Welsh has ever had – which would make it more difficult to read as a starting point.

It is not, in my opinion, the finest work of Irvine Welsh, but it is an important entry into a series of books that have become pivotal entries in the canon of Scottish literature.

This was a tremendously difficult pairing to make. there are a couple of reasons I decided to go with Black Label

in the end as it really did seem to be the best fit.

is my go-to day-to-day dram, the one that sits in the decanter

, the old faithful. It also, more importantly, served as a starting point for me. It was my first foray into ‘decent’ whiskies. The glimpse that it offered was what started my addiction of trying new and increasingly more nuanced malt whiskies. Skagboys

is ultimately a chronicle of a start of heroin addiction and that makes it the prime reason for pairing these two.

It is also a remnant of the era Skagboys

is set in. Now that this distillery has left its longstanding home in Kilmarnock, it mirrors the descent into a new, unkown maturity due in large part to external rather than internal factors. Both events saw what can only be seen as a descent from higher places for those around them, Johnnie Walker leaving a huge amount of unemployment in the area and Renton and co. leaving distruction and despair in their wake.

It may be a somewhat tenuous link, but give it a try. It works!

A Book and a Dram

A Book and a Dram